I prepared a lot of physical assets and other elements for the convention run of "Fallout: Nukeland".

System:
I used Retrocalypse, a simple set of rules based on the Old School Hack: essentially a stripped down D&D retroclone reskinned for Fallout.

I was also considering Fate Core, a system which I have a lot of experienced running, and participated in some great discussions on how to port it. Another game designer had started a draft using Atomic Robo's system of Modes, Mega-Stunts, and Inventions. That was a few years ago, and by the time I started back into it, the designer had moved on to adapting Mantles from the Dresden Files Accelerated ruleset.

I ultimately went back to Retrocalypse, though, as I had created a number of props and tools to run it, chiefly printing a set of custom playing cards with the rules and some example monsters from the game.

Characters:
I made 12 Archetypes for players to choose from. I wanted to make many more, but a good article recommended limiting character options to 10-12 for a convention. Each archetype had its own pick list of unique abilities. Players also roll for stats, and pick a Perk (another type of ability, many of which are based on perks in the video game series).

Retrocalypse was written with eight archetypes - I took four of them and added a spin:

And then I used the other four as listed:
I then proceeded to flesh out the characters, leaving only a few things for players to customize at the table:
Karma Points:
Retrocalypse uses Karma Points - essentially themed Fate point analogues - which could be spent for various generic mechanical benefits. There were also Good and Bad mechanical effects that a player could activate by spending the appropriate type of Karma. I made sure to emphasize that bad Karma was a reward for entertaining in-game evil, not for being a dick to the GM and other players. Anytime the character would do something cool and bad that merited twirling a moustache or a "you bastard!", that earned Bad Karma. Likewise, certain game actions or out-of-game amusement could earn Good Karma points.

I spent a great deal of effort making Good and Bad Karma points to use for the game:
I assembled the Karma points by sticking the labels onto the bottlecaps, and then covering the label with the epoxy resin craft disk. Usually this method is used to create craft necklace pendants: artists clip out images or create their own, glue them to the bottlecap, seal them with the epoxy disks I mentioned, or pour in a mixture of clear resin, and then they attach jump rings and use them in a necklace, earrings, etc.. I didn't want to deal with pouring epoxy resin and waiting for it to dry, since I was making 50 of these, so expedience won out over quality.

Unfortunately, the smooth backs of the bottlecaps, when placed against the flexible and slightly concave epoxy resin disks, created a vacuum: bottlecaps stacked together tended to stick together, very strongly, and separating them occasionally pulled the label right off of the bottlecap along with the epoxy disk. If I did it again, I'd either use glossy paper and heavy adhesive to stick it to the bottlecap, rather than prepunched labels, and/or I would use liquid resin to seal the images. 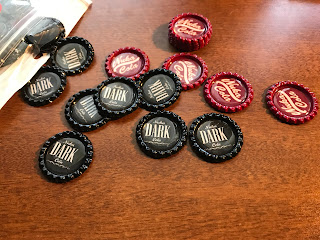 Picture Tokens:
I printed a large number of 1-inch tokens on labels to represent the players and their opposition, with images taken liberally from Fallout wiki sites and other internet sources. These were adhered to a thin plastic backing used in binder covers; I then punched the tokens out using a 1-inch round die.

To store the tokens, I found a nice little bead supply box with small, stackable bead caddies that all screwed together. I was able to split up the tokens by opponent type (Raider, Mutant, Animal, Regular people, Mercs/Military, Brotherhood of Steel, etc.).

Unfortunately, I either had really old labels with weak adhesive, or the thin plastic backing texture was not conducive to label adhesion: a lot of the labels pulled up at the edges. This may have been another case for a traditional adhesive.

Another mistake I made was trying to seal the inkjet-printed labels: when I left them out to dry, the edges of the label sheets curled up, and if I used too much fixative, it pooled up and totally fogged up the images near the center. Lightly-sealed labels were fine, but I had to reprint a lot, especially since these 1-inch round labels did not confirm to a standard Avery template.

I also took the player pieces from my Fallout board game, and used them for the players.

Using the Tokens:
One of the complications using the Retrocalypse game setting is they give you a cool countdown-style prop to coordinate when peoples' actions happen in the round. You could use a handful of action type cards for each player, so they can declare what they are doing - the GM can just run through the round one action type at a time. But the countdown prop is a nice visual. Unfortunately, this means players and GMs using a map need two sets of tokens: one for whatever game map is being used, and one for this countdown prop. I let the players use their 3-d miniatures on the game map, while I used the players' tokens to serve as their initiative counters. I did the opposite for the monsters: using their picture tokens on the game map, while tracking their initiatives on the countdown prop using colored generic game pawns and matching poker chips.

GM Screen:
I created a series of cheat sheets (here and here) with the Retrocalypse rules, and inserted them in one of those four-panel, portrait-orientation customizable GM screens. I wish they were better made: they tend to break where they fold after prolonged use.
Posted by devonapple at 6:09 PM

Earlier in the process, I came up with 3-4 Background options for each of Retrocalypse's eight base classes, so Vault Dweller has "Vault Hood", "Vault Nerd" , "Vault Soc" , and "Vault Guard". Super Mutant has "Spy", "Master", "Behemoth", and "Intelligent". Each background comes with 2 Perks/Traits, and maybe 7 stat points, pre-spent in a particular way, according to their concept.

Then, I came up with Career options, which are supposed to be archetype-agnostic and reflect loose specializations. Each would come with another 2 Perks/Traits, and some pre-spent Stat points. My first list was very long, and I tried to narrow it down to 10-13 choices:

Another option was to start with highlighting a particular SPECIAL stat, plus a few other variations:

So the players would take their Background and their Career and add up all the Perks/Traits, then combine the SPECIAL stats each provided. After which they would pick 2 more Perks and get another few points to spend on their SPECIAL stats.

Does this sound like bananas to drop on players at a convention game?