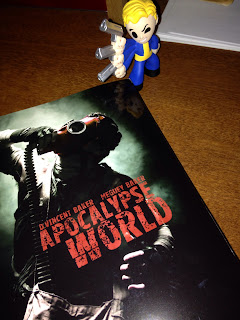 I am attempting to syncretize a collection of GM touchpoints from my collection of RPGs and gaming articles. There are so many good resources out there, and I feel I'm swimming in a sea filled with numerous currents, pulled in many directions. I'm hoping to compile a guidance document to bolster my gaming.

This is probably just a fraction of the potential best practices to be gleaned from these games or resources, and I certainly have more items that I could trawl for gems. Some of these do have some bearing on the rules or character creation, it is true, but my ideal is to have a system-neutral skeleton that works for me.


Posted by devonapple at 3:05 PM No comments:

I tried the 1-inch round punch on some of the thin chipboard sheets I use as backing for printed map tiles - the device is not sharp or strong enough to get through, so the best I could probably do is print on (or affix labels to) the thickest cardstock that my printer will accept, maybe laminate it, then trim using the punch. 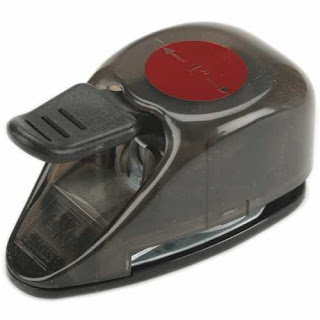 Posted by devonapple at 5:30 PM No comments:

In days of old, I amassed a collection of tokens to be used as miniatures for the RPGs I was running (science fiction and fantasy, mostly). I bought sheets of 1-inch-round labels, on which I would print faces, monsters, etc., which I would affix to 1-inch round wooden disks from an art supply store. Some of the wooden disks were basically squared on the edge, which was perfect. Some of them, however, were a lot more rounded and smooth, which made the label crinkle at the edges.

Recently, I acquired a laminator as well as a 1-inch punch. I think what I may do now is experiment. I have full-sheet labels, so my plan is to print a bunch of 1-inch portraits/images, affix the label to a letter-sized piece of cardboard, and then use the punch to liberate them. I may also see what I can do to seal them with acrylic or something like that.

Another option may be to print on some cardstock, laminate it, then punch it out. That would expose the edges to possible damage, but the image would remain protected.
Posted by devonapple at 4:02 PM 3 comments:

It's been awhile since I blogged about gaming. I'm actually doing okay on gaming at the moment. There are plenty of games I want to try, and I have a stockpile of indie games I've collected and perused. But my time for gaming is already near peak.

I belong to the LARP troupe Dreams of Deirdre, and we just published a book explaining the rules we've been using and honing for our games over the years: LARPS. We run games at a number of Bay Area gaming conventions. I am also the LARP coordinator for BigBadCon, an October RPG/LARP convention held in Oakland, CA.

I just got out of a long-term RuneQuest game which we played almost every month for over 5 years. I am looking forward to moving on to a new regular game.

My Monday group and I played the Dresden Files RPG for a number of years, and I was pleased how well they took to the Fate ruleset. I also spent a lot of time on the forums for DFRPG. We did a brief stint playing Apocalypse World, but it wasn't everybody's scene, so we moved on to Bulldogs!, a Fate game adapted (and streamlined) from a d20 sci-fi setting.

In days of old, I cut my teeth on Champions, AD&D 2nd edition, and a little Call of Cthulhu on the side. I have since delved into Mutants & Masterminds, Trail of Cthulhu, and D&D 3.x. I never made the leap to either Pathfinder or D&D 4.0, though with the number of supplements I acquired for D&D 3.x, Pathfinder would make the most sense, nothing against 4.0.

I got into Fate when my Monday group wanted to do a Dresden Files game, and when the opportunity came up, I invested in the Fate Core Kickstarter, which has been a bounty of great supplements and books. I have been adapting my Bulldogs! game with an occasional rule from the more recent Fate Core, but for some key elements, I remain true to the established Bulldogs! rules.

I occasionally play Fiasco, and have amassed a hefty dossier of playsets.

I have set up a GM Walk-Away Kit for gaming emergencies (though I'll have to rely on a laptop instead of a tablet).

The list of games I want to try is quite long, and I may attempt it here later. There are so many developers creating new and innovative RPGs, and some larger publishers have created some beautiful work and nice games.
Posted by devonapple at 3:42 PM No comments:

I have successfully linked Blogger to my domain name, in the hopes of then linking entries up to G+.
Posted by devonapple at 9:58 AM